What a thrill to have Super Bowl® 50 right in our own backyard at Levi’s® Stadium! ‘Twas a game to remember, a no holds-barred match that pitted the tried and true Denver Broncos against the young and wild Carolina Panthers. And today, we at TiVo® announced our top commercials and moments for Super Bowl 50!

First off, a Super Bowl ain’t a Super Bowl without the commercials! From patriotic themes to quirky odd-balls, this year’s commercials definitely pushed the envelope when it comes to the definition of “different.”

Check out the top 10 commercials and promotions from Super Bowl 50, according to TiVo!

3. Taco Bell Quesalupa – Bigger Than Everything

4. Buick Cascada – That Convertible’s a Buick

6. Marmot – Fall in Love with the Outside

A lot has changed from last year’s Super Bowl. If the transition (at least for this year) from Roman to Arabic numerals wasn’t enough, here is Super Bowl 50 vs. Super Bowl XLIX by the numbers:

For the sixth year in a row, TiVo found viewership for the half-time show exceeded viewership of the overall game. Despite scientifically proven studies of a significant spike in indoor plumbing usage during the halftime break, it seems viewers can’t stay away from the screen for too long, for fear of missing Coldplay’s half-time performance! However, it was Beyoncé’s appearance that fans were truly anticipating. Super Bowl 50’s halftime show ranked third behind 2012’s, featuring Madonna with LMFAO, MIA, Nicki Minaj, and CeeLo, and last year’s performance by Katy Perry with Lenny Kravitz. 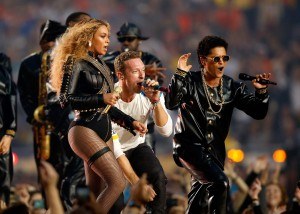 Alas, commercials aside, we can’t have a Super Bowl without awesome football to watch! Here are the top three re-watched moments from the battle of attrition and defenses between the Denver Broncos and the Carolina Panthers:

1. C.J. Anderson scrambles into the end zone, giving the Broncos a 22-10 lead with 3 minutes remaining.

2. Super Bowl MVP Von Miller strips the ball from Cam Newton’s hand with 4 minutes remaining in the 4th quarter and the Panthers down by 6.

3. Replays show Cam Newton backed away from the scramble for the lost football.

As you may well know by now, we here at TiVo have been in the business of tracking and releasing Super Bowl data for over a decade. For my fellow historians out there, here are the top commercials from the past 10 Super Bowls:

2014:  Comedians in Cars Getting Coffee (Halftime)

TiVo subscribers can also view all Super Bowl 50 commercials from their TiVo DVR. Go to TiVo Central and either hit 5 on the TiVo remote or go to “Find TV Movies and Videos” > “Browse TV & Movies” > “New & Notable.”

TiVo Research’s Super Bowl 50 analysis was prepared using aggregated, anonymous, second-by-second audience measurement data from a sample of approximately 30,000 anonymous households with the Emmy®-award winning TiVo® service. TiVo Research gauges the interest in programming content by measuring the percentage of the TiVo audience watching in “play” speed. The most engaging ads are determined by looking for spots with the biggest increase in viewership relative to the viewership in the surrounding 15 minutes of programming, offering a true reflection of audience engagement.