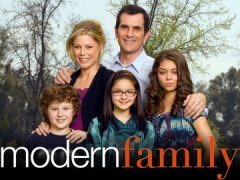 Modern Family over Grey’s Anatomy…the Two and a Half Men premiere…and Clint Eastwood are just a few of the 2011 TiVo highlights. As 2011 comes to a close, TiVo did some research to find out what else was popular this year. Some of the findings may surprise you…

Rounding out the top five TV moments in 2011 are:

“Modern Family” in fact became the number one ranked show on TiVo’s Season Pass list in October, toppling “Grey’s Anatomy” which held the number one spot for months on end.

Of all the recording and time shifting that took place throughout 2011 thanks to TiVo, the most time shifted broadcast programs aired on the CW. “The Vampire Diaries,” “90210,” “Gossip Girl” and “Smallville” were all viewed in a time shifted mode more than 83% of the time (and conversely just watched live 17% of the time)!

TiVo users also remained fans in 2011 of “classic” actors. The top ten list of actors on TiVo’s Wishlist are:

What were some of your top TiVo highlights?
what to watch