Virgin founder Sir Richard Branson has told TechRadar that he thinks the new TiVo-powered Virgin Media boxes are so good that “the only problem is whether I have to sell my island to move to a place where I can get TiVo.”

Read this and more… 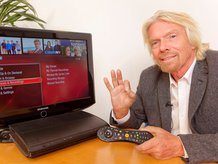 Virgin founder Sir Richard Branson has told TechRadar that he thinks the new TiVo-powered Virgin Media boxes are a weapon that can be used to convert thousands of Sky customers.

Virgin Media launched its TiVo dvr at the very end of 2010, although very few boxes are in the market at the current time.

As more and more customers get the next-generation set top box, Virgin Media will begin the push for the new equipment, which has already wowed critics with its feature set, including a backwards EPG, searchable content and, crucially, the famous TiVo suggestion functionality.

A weapon against Sky

“I think that it is fantastic,” Branson told TechRadar and T3 in an exclusive interview.

“There’s numerous things one can do and I think that we have finally got a weapon that can give Sky a run for their money.

“We may well get thousands of people switching over from Sky to Virgin; it’s a weapon that we’ve got that they can never develop which obviously gives us a bit of an advantage.”

The British entrepreneur was getting his first taste of the technology when we met him, and was wondering just how he could take advantage of the service from his normal base of his privately-owned Caribbean paradise Necker Island.

“The only problem is whether I have to sell my island to move to a place where I can get TiVo,” he joked.

“Someone suggested that I swap Necker Island for the Isle of Wight so I’m going to have to work out if I go that far or maybe lay an enormous cable from here to the Caribbean; that would be tremendous.”

TechRadar will be producing an extensive Virgin Media TiVo review next week.